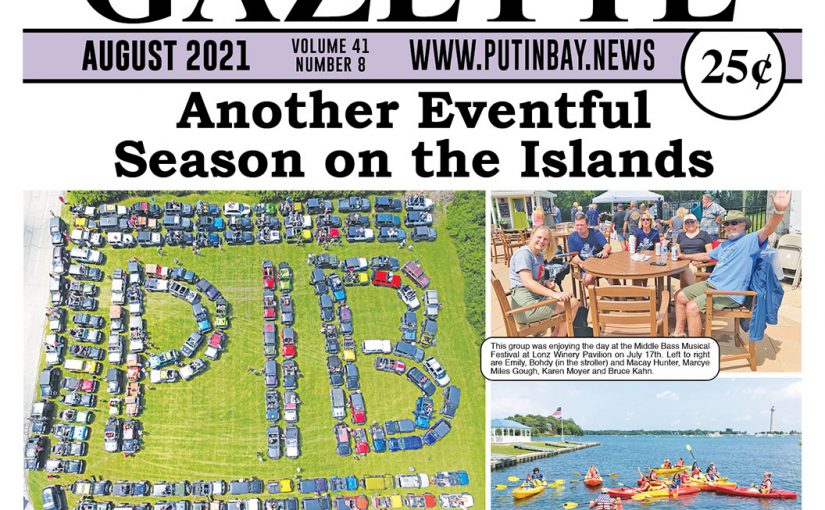 putinbay.com is proud to present the Put-in-Bay Gazette’s Island Diary. For the best South Bass Island journalism, visit putinbay.news and subscribe to the Gazette today!

Covid has been a difficult time for everyone, but for the Cowan and Martin families from Lakeview Allotment on East Point, it had a unique twist.

Our grandson Elliot Cowan had his Bar Mitzvah date postponed at least twice due to lock down. So finally after preparing for this event a second time, he had his Bar Mitzvah via Zoom on December 19th. He and his family Alison, Chad, Zoe and Annabelle were in Amsterdam. Their Rabbi was in Nashville, the Cantor was in Birmingham, Alabama, and family and friends were spread across three or four countries and several time zones. We were all so proud of Elliot and all he was able to learn and the beautiful service he was able to lead us through. As a grandparent, it was very hard for my husband and me and his other grandmother Patty Cowan not to be with him in person. Over 100 screens were on the Zoom, and the whole experience went off without a hitch.

This summer on July 10th, the final celebration was able to take place. Our family and friends were able to gather on Put-in-Bay at the Crew’s Nest Pavilion for Elliot’s long overdue Bar Mitzvah party. In the process of honoring Elliot, we realized that this may have indeed been the first Bar Mitzvah party on the Island. We are pleased to be able to share a little of our joy with you.

If you’re on the islands and own a Lyman boat, you may be interested in this report from the Lyman Boat Owners Association.

Over the past few years, the Lyman Boat Owners Association has been frequently asked, “How many Lymans are still in use?” and/or “Where are they?” To be honest, we wondered about this as well, but didn’t have a clue other than a speculative guess. So, we launched the “Hull Registry Project” in an effort to gather data with which to use to offer a more statistically valid, educated guess.

This project is intended to collect and share information about the Lyman Boats that have survived through the years. The main focus is on Post-War wood hull Lymans (1946 – 1973) but will also archive data on Pre-WWII wood hull Lymans and the later Fiberglass hull Lymans.

In order to collect current data, a Hull Registry Form was published and posted on the LBOA Facebook page. Since then, this form has evolved to include a more accurate model description and/or a missing hull length (in the Fiberglass Hull section). A link to the latest version (2.1) is included in a comment below.

If you want to stay abreast of the progress of this Hull Registry Project, simply click on the “Follow” button. Future post will provide you with a glimpse of the database in use to include how it works, sample output reports and periodic overall progress.

On Saturday afternoon, August 14th, Germans of all creeds, colors, races and nationalities can stop by Das Lokal, the Biergarten at the Goat Soup and Whiskey, and enjoy the “Schweinshaxe Und Bier Festival” with live music from the 20-piece German orchestra, the Deutscher Musik Verein (DMV) (German Music Society). The DMV will start at 2 p.m. and end at 5 p.m., but the party won’t end until 6 p.m.

If you’re hungry, there will be a Schweinshaxen (pork knuckles) with potato salad and sauerkraut special, and for your drinking pleasure there are wines and several imported biers to choose from. Regular fare available, too.

Join many of the islanders with German ancestors and get the feeling of being in Munich during Oktoberfest, This a Saturday afternoon island event you’ll want to attend. There’s no need to wear your Lederhosen or Dirndl! Just come down and enjoy, no reservations necessary.

Don’t forget the Gemütlichkeit Festival on Saturday afternoon, August 21st, with the Phil Yan Polka Band playing between 2 and 6 p.m. in the Biergarten. As always, there will be imported bier, brats and pretzels. FYI – Gemütlichkeit translates coziness, friendliness, snugness, comfortableness and unhurriedness. So come down and get that “Put-in-Bay Feeling!”