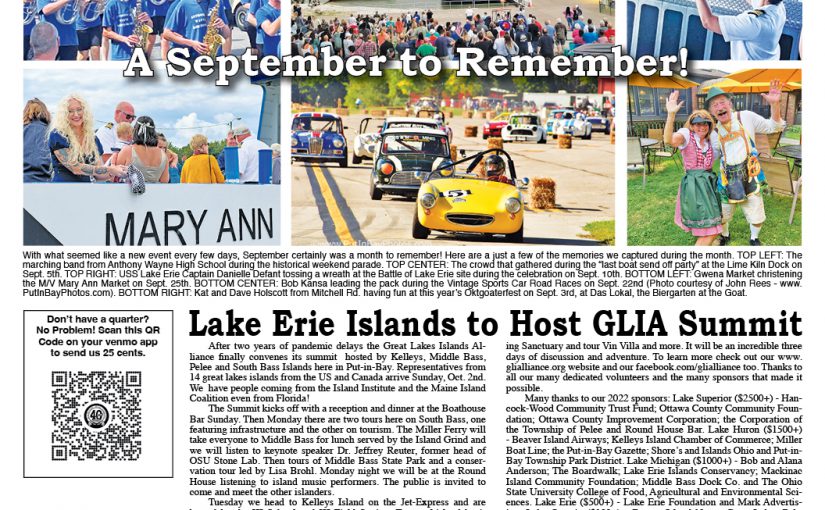 The hot topic on the island is the police contract between the Village and the Township. The current contract between the Village and the Township Trustees expires at the end of the year, and the trustees are looking into the possibility of contracting with the Ottawa County Sheriff to police the township portion of the Bass Islands. The trustees claim the Village breached the current contract when it did not provide an officer on Middle Bass this past summer.

Officials have been going back and forth with what a new contract will cost, coverage of Middle Bass, liability issues, more township participation in policing issues and other items. Currently, the Township pays about 40% of the entire island police budget of $850 to $900 thousand per year. A recent check of the police calls shows that 39% are in the Township portion of the island.

At a recent Township meeting there seemed to be little support from the audience for contracting with the Sheriff which by his own calculation would cost about $700 to $750 thousand per year to police just the township portion of the islands.

The trustees are asking island property owners to vote their approval for a 1.1-mil property tax levy in November that would raise about $250,000.

In the meantime, the Village is looking into ways of securing revenue to be used to increase funding for the island police department which is currently being plagued with the nationwide shortage of police officers. To compete, the police department must attract officers with increased pay, better equipment, training and housing. Revenue options that Village officials have discussed include better collection of the gross receipts tax, paid parking, permit parking, a sin tax, a head tax and even an income tax among other things.

At the Police Commission meeting a the Town Hall on Tuesday, September 27th, it was evident that the there has been progress in putting a contract together between the Village and the Township, but at this time there is still no decision as to what direction the Township Trustees will take when it comes to police protection in the township.