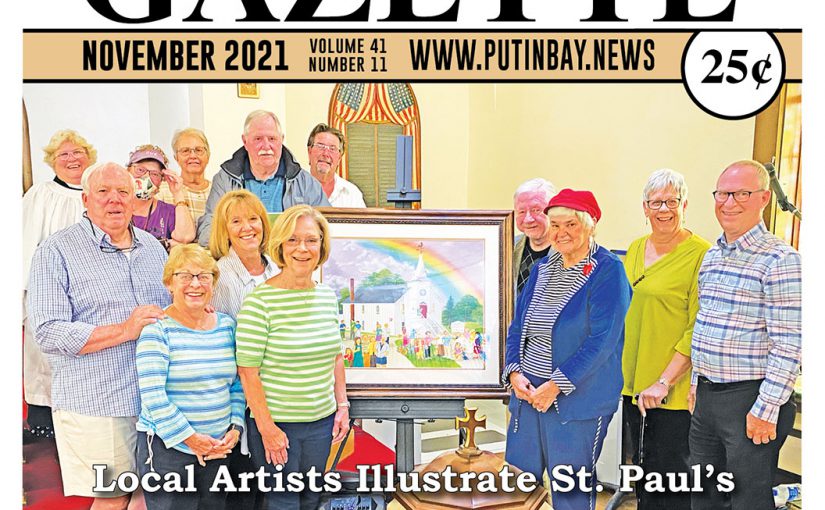 putinbay.com is proud to present the Put-in-Bay Gazette’s News. For the best South Bass Island journalism, visit putinbay.news and subscribe to the Gazette today!

Another summer season here on South Bass Island is in the books. And what an amazingly busy season it was. People eagerly flocked to the island in record numbers and focused on having an enjoyable time (mostly without incident). This didn’t happen by accident. Three years of work went into reshaping the island’s story and promotion. This paradigm shift was led by Brad Ohlemacher. Brad brought leadership and a successful business perspective to the “Safe Island Task Force” an ad hoc community group formed to find lasting solutions to complicated issues under very difficult circumstances.

You may not know Brad, but according to his sister Barb Hodgson “our VERY first trip to PIB was in 1968 when our grandfather, Burton Ohlemacher, brought us here on his boat.” Brad may have grown up in Elyria, but summers were all about being on his Formula boat here at the bay. It’s easy to see how he and his sister found themselves being drawn into island life. After graduating from OSU, Brad worked at and later ran the family business known as EMC Precision. Brad’s leadership there attracted politicians and presidents for photo-ops.

Around 1994, Brad bought his first island property on East Point and by 2000 had built a house here. In 2014 he made the leap from mainland to island resident living on the picturesque West Shore. Somewhere during that transition Brad was introduced to Angela Berger. Brad, who was an eligible island bachelor, found love here on the island. Brad and Angie would marry in 2015 and form a “partnership” in business and love.

There are many factors that guide a person’s journey. For Brad a rare opportunity had led him to become a part owner in the well-known island hang out called Joe’s Bar and Grill. What had started as a “labor of love” has now become a well managed “5-star dive bar.” According to partners Nan and Marc Burr “Brad’s dedication and teamwork have helped make “Joe’s” a financial success, too”.

2016 brought Banyan Cove Phase 2 development led by Brad. Later in December, Angie and Brad took a big step together and purchased the Bird’s Nest Resort. With Angie’s attention to detail, a marketing strategy focused on affordable family friendly pricing and upgraded rooms, Birds Nest was positioned for success. 2021 was their best year ever.

Brad’s skills were being noticed and when the Put-in-Bay Chamber called Brad agreed to serve. In that first year on the board Brad became increasingly aware of negative visitation trends that were starting to snarl the island’s summer season. Over capacity visitation and unfocused marketing was bringing unusually large crowds during the third week in July. The pot finally boiled over the summer of 2017. This seminal moment in island awareness about local governance and capacity management required immediate action.

As president of the PIB Chamber of Commerce at the time, Brad reached out to a dozen stakeholders in the island’s future success to come to a “small” meeting. A raucous meeting of nearly 100 people gathered at the Put-in-Bay Senior Center ready to share their opinions. From this critical island gathering the “Safe Island Task Force” was born.

SITF worked tirelessly to identify the issues from the numerous complaints shared. Over the winter a dedicated group of SITF volunteers meet regularly and worked to identify the key areas of concern. This process included reaching out to off islanders, PR expert Bryan Edwards, former Toledo Mayor Mike Bell, and retired state trooper Aaron Walker. Brad’s ability to guide discussion, his friendly style of leadership, brought a disparate group of voices together. His wife Angie explained; “Brad had the skills and time to bring the island together to have a conversation about what needed to change.”

Change is not easy. Keeping that glimmer of progress alive was skillfully nurtured by Brad over the next three years. Brad and SITF raised a significant amount of funds that ultimately resulted in new island branding by Cleveland agency Flourish that was rolled out in 2021. This effort, in conjunction with an advertising campaign, identified the islands key growth areas and pin pointed Sunday through Thursday travel targeting families and empty nesters. The net result could clearly be seen this year with dramatic increases in these key demographics.

Although SITF is not currently meeting, one of the areas of concern identified by Brad and SITF is a stable, well trained and sufficiently funded police department. Despite the horrible tragedy of losing his son Jack this spring, Brad has doubled down on facilitating conversations and fundraising to help our police department with gear and other unfunded needs. One day, not so long ago I was with Brad when someone asked him, “How to you spell your last name?” His great response was “It’s so easy OH…LE….MA…CH…ER”! When the paradigm shifts, I’m thankful for leaders that step forward.