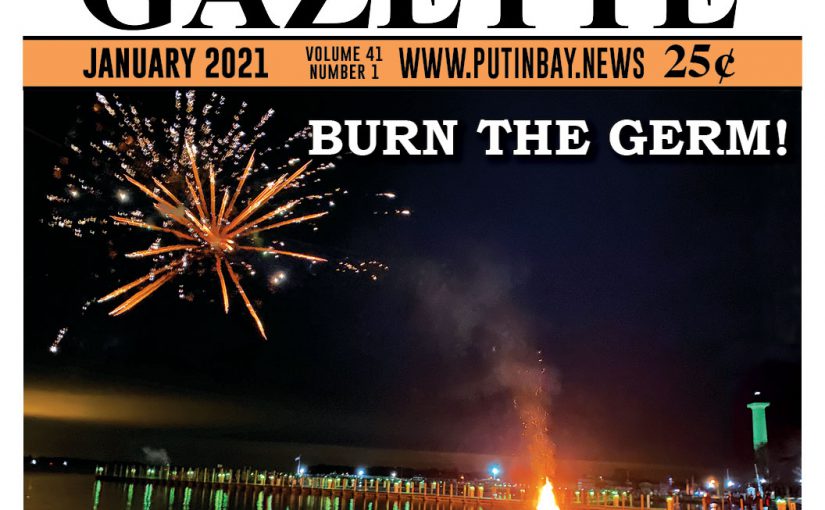 This year’s Christmas Letter from the Patches O’Houlihan family (live from Middle Bass Island) is either late or really early.

2020 was the best year ever (in spite of the Covid pandemic). Families were forced to look each other in the eye. Quarantining created an opportunity for honest dialog that lead to three divorces in the family. For better or worse but never for lunch!

Cousin Eddy had a hard time getting used to people coming into the MBI General Store wearing surgical masks. Over several months he assumed he was being robbed daily. Normally, he knows what to make each patron before they could sit down. Now he starts everyone with a Crème DeMint Grasshopper. Welcome back disco era liver damage!

Our neighbor, Catmanx, entered the Vitamix Smoothie Recipe Contest. He thought he had a sure winner with his “high carb, rye bread, Old Bay seasoning and concord jelly” smoothie. The contest ended in September and he is waiting for the company to announce his victory. We didn’t have the heart to tell him that a resident from Wapakoneta, Ohio, won using primarily kale and blueberries as ingredients.

Uncle Urinal has given up sleeping on the MBI airport runway after his beach towel was sucked into the exhaust manifold of the Tin Goose on take-off. Sugar Island does not have an airstrip but it is now home to a Ford Tri-motor after a tricky landing. After the crash, the fuselage was repurposed to house Beer Barrel employees during the season.

Aunt Landell caught a record amount of walleye this year. Her secret? Cigarettes and alcohol. She spits on her worms before casting. Apparently the nicotine and Blatz combination is irresistible to the fish.

Our niece, Doris Onions, had her third child. Plague or no plague, babies come at the least opportune time. It was OK though. Her high school graduation was cancelled due to social distancing. I am not sure social distancing is part of her vocabulary.

According to Doris’s mother, Iris Onions, Doris was a difficult birth. “Knowing what I do now, I would have put a 17-year-old boy and a bottle of Vodka in the delivery room and she would have popped right out!”

Our annual trip to Sandusky was cancelled. Our 28′ Marinette’s stuffing box (where the propeller shaft penetrates the hull) was compromised. The resulting leak kept us on MBI. We tried to make this a teaching moment for Doris but the lecture on “unwelcome fluids” fell on deaf ears.

Our favorite Bond villain, daughter Addie, graduated from University of Chicago (where fun goes to die!). She is head of a top-secret spy ring bent on ruining the world’s financial institutions. We have told her there was no escaping paying back her college debt.

Nephew Jackson won his round of High School Jeopardy. His favorite category? Obscure Civil War Generals and their mistresses.

A Jackson fun fact: US President William Howard Taft’s nickname was “Big Lub.” He wrestled while attending Yale University (Yale boasts five US presidents and 31 living billionaires). He weighed over 300 pounds and belly flopped his opponents into submission (that guy can take a lubbing). He visited Middle Bass several times in the early 20th century, a guest of many captains of industry.

Little Russ dressed as a bottle of Calamine lotion for nature camp. He was voted most useful in the pageant.

My loving husband discovered some disturbing news about beer. Beer pretends to be your friend but it is not. In the short run beer is like a buddy that you love to hang around. But in the long run, that buddy runs up your credit card debt, causes unsightly weight gain, encourages you to make bad decisions, and creates migraine headaches. Beer has been banned from the porch. We are working on evicting Senior Tequila, Mr. Crown Royal, and “Debbi” Vodka.

Well, TTFN (Ta Ta For Now). We hope you have a great year. Don’t forget to submit names for Doris’s new baby. The raffle will be in March when the baby arrives. There is a second raffle if you correctly guess the name of the baby’s father.

The following piece is published in this month’s Put-in-Bay Gazette. The Gazette has been producing incredible independent Put-in-Bay island news for over 40 years. If you have any interest at all in what is happening on South Bass Island, we urge you strongly to subscribe to the Put-in-Bay Gazette. One-year online subscriptions are only $15, and print subscriptions are available as well. To subscribe please click here.